The École d'architecture de la ville & des territoires aims to train architects, that is to say professionals capable of expressing and arguing points of view, implementing concrete solutions, building a critical and personal position on their practice and assuming the ethical and social responsibilities incumbent on them.

The teaching of architectural design is understood as the set of ideas and principles that constitute architectural knowledge, articulating theory and practice and aiming at the acquisition of a secular culture in order to initiate relevant contemporary responses to prepare the future.

This is why he insists on the permanency of architecture in order to better respond to what, as a matter of fact, is subject to the incessant evolution of regulations and standards.

The licence is centred on the practice of the project and on the acquisition of the fundamental concepts and tools of the discipline through four complementary fields: history and theory, construction, urbanism and landscape, and representation. It concludes with the production of a study report, a true initiation to research.

The Master’s degree allows students to develop critical thinking and a nuanced vision about the discipline. It is organised into four areas of specialisation:

The Architecture & Experience pathway proposes to confront a theoretical reflection on the rules that guide the design of a project with the specific conditions of an architectural programme.
The work is nurtured beforehand by the reflection undertaken in the seminar. The level of complexity expected is not so much the in-scale or nature of the programme itself as in the number of levels of meaning involved in the projects.
Culture and history are mobilised in the service of precise and articulated responses to the challenges posed by the evolution of contemporary situations.

The Fragments pathway questions architecture through its relationship to the metropolis and the territory. The dialogue sought between geography and architectural signs imposes changes in scale and perspective, assumes a certain distance, and implies the permanent questioning of project-thinking. The pathway avoids the apparent opposition between metropolitan contingencies and architectural discipline and refuses to choose between quality of design and complexity of process. The assumption is that a resolution is possible, and that one should feed and contribute to the other.

The Matter of thinking pathway is based on the hypothesis that architecture is (also) constructed. The constructed is not limited to the implementation but is based on theoretical knowledge that allows a project to be developed from its materiality. Within the Matter of thinking pathway, a ‘Structure and Architecture’ course, in association with the École des Ponts ParisTech, intended for both architectural and engineering students, enables architects to become aware of the world of engineering and vice versa, thus contributing to unlocking their respective worlds. The ‘Structure and Architecture’ course is a recognised added value in a professional career. Once they have graduated, architects can, under certain conditions, continue their studies at the École des Ponts ParisTech so as to obtain the title of engineer.

The Transformation pathway explores the architectural problems linked to the recycling or reuse of the built environment (building on the built) and to the diversion of the primary vocation of certain sites (empty subdivisions and large housing estates, derelict industrial zones, abandoned infrastructure, etc.). It takes seriously the provisions of the ‘SCoT facteur 4’ which prohibit any urban extension and explore the conditions of an architecture made with - and no longer on - the ruins of the current world. We must learn to transform.
Such transformations are capable of reinterpreting architectural and urban relations as well as construction processes and the economy of construction.
The teaching is based on the hypothesis that it is now, and increasingly so, a matter of building with and from the existing, and of recycling or reusing the already existing.

The representations and ideas on which these courses of study are based are made explicit and stated: this is the best way to enable students to construct their own architectural posture, as they pass through a series of singular worlds during their studies.

During these years of study, students are confronted with the professional world through a long internship. We also allow them to take a one-year break to carry out other experiences.

After their State diploma in architecture, students can obtain their licence to practice by obtaining an HMONP (Habilitation to Exercise Project Management in One’s Own Name) this training is intended for architects who
have graduated, either directly from their studies or after a first professional experience.

In this context, the School of Architecture offers post-master's courses at the forefront of developments in the profession and the challenges of the environmental transition at the level of architecture and urban planning.

Founded in 2005, The DSA in Architecture and Urban Planning Open to French and foreign architects and landscape architects. This diploma is based on the observation that the architect-urban planner is nowadays totally committed to the project and its representation in space, thus forming, with regard to urban issues, a
new profession, hitherto lacking specific training in France.

Created in 2013, the DPEA PoCa Post-Carbone Co-produced with the École des Ponts ParisTech, the (DPEA) training course has international ambition. It focuses on the three main aspects of the impact of buildings and infrastructures on the environment: materials and their transformations, the architecture of the structure and envelopes and their energy content.

The School of Architecture also offers the possibility of completing a PhD. Doctoral students are hosted by a research team, the Observatoire de la condition suburbaine (OCS), a research component of the Université Gustave Eiffel. The OCS is also part of the UMR AUSser3329. The laboratory is structured around the axes of architectural theory, territorial architecture, energy and, more importantly, the relationship between these three fields. The research activity is linked as much as possible to the issues taught in the bachelor's, master's and post-graduate programs and feeds back into the teaching. One of the particularities of its activity is the publication of reference works, mainly the review Marnes: documents d'architecture.

Finally, as part of its continuing education offer, the School of Architecture proposes short sessions of qualifying and certifying continuing education to enable professionals to develop their skills. It also covers the educational costs of training courses leading to a diploma, such as the HMONP, the DSA in architecture and urban planning and the DPEA PoCa Post-Carbone.

All these components work in synergy based on the common conviction that the theory, history and practice of the architectural project offer a jurisprudence for envisaging the territories of tomorrow and negotiating the transition that current environmental concerns call for.

The academic year is punctuated by events that contribute to a desire for openness and contribute to the critical and introspective capacity of the School of Architecture.

The inter-year workshop
With the aim of experimenting with new pedagogies, the School has been organising an inter-year intensive workshop since 2016. This short one-week exercise gives 2nd, 3rd, and 4th year students the opportunity to
work together on cross-cutting reflections on the city, the territory and architecture. Nearly 250 students choose to take part in one of the eight workshops offered by new teaching teams formed for the occasion.

The Grand Tour
To mark the end of each semester, but also as part of an introspective approach, the School organises two ‘grand tours’ of the workshops each year during which all the works that have just been graded by the project jury are presented. A true moment of pedagogical encounter between the teachers, students and administrative staff, these ‘grand tours’ are also subject to an expert assessment by external personalities from the world of architecture, mandated by the school to ‘evaluate’ its student production and submit a report.

Lectures
Lectures, debates and study days are regularly organised at the School. These moments of exchange with external speakers allow students to relate the issues of architecture and the city to social debates and controversies, which are fundamental to understanding and learning about territories.

It is reinforced by a dynamic of international exchanges and by numerous study trips abroad aimed at enriching the career of our students. 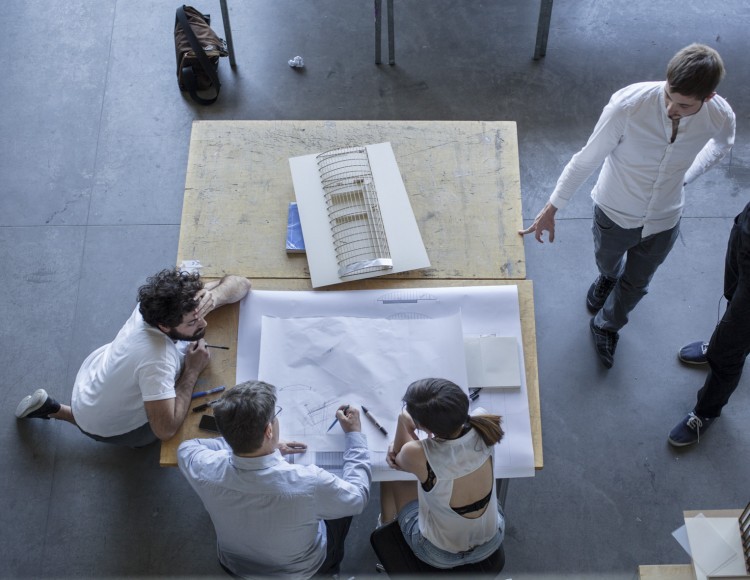